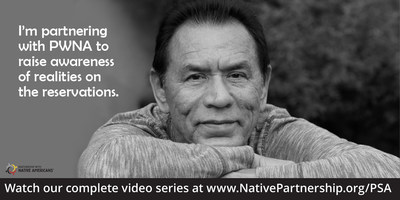 The partnership and PSA series were announced on Friday, Oct. 4 at the third annual Native American Cultural Celebration hosted by the Museum of Native American History. PWNA unveiled a clip of the PSA series during a press conference.

«As an American, and a Native American, it’s important to bring attention to the critical issues and disparities that Native people face every single day,» said Studi. «My hope is that together with PWNA we can increase awareness and show that supporting Native-led causes is the only way we can create change.»

The five-part «Realities Video Series with Wes Studi» includes an accurate portrayal of life on the reservation and dispels long-held myths that continue to impact Native communities today. Studi discusses history and treaties, realities on the reservations, education dreams and disparities, casino economics and the lack of charitable giving for Native causes and communities, some of which mirror third-world conditions.

«To collaborate with someone as admired and informed as Wes Studi is an incredible honor,» said Robbi Dietrich, president and CEO of PWNA. «PWNA is committed to championing hope for Native American communities and we hope our newly created partnership with Wes will result in positive outcomes for our Native community partners.»

PWNA is also hosting a private reception for Studi later this month in celebration of his Honorary Oscar achievement from the Academy of Motion Picture Arts & Sciences, with the support of Paramount Pictures.

About Wes Studi
From small-town Oklahoma native to internationally acclaimed actor and musician, Wes Studi credits his passion and multi-faceted background for his powerful character portrayals that forever changed a Hollywood stereotype. Wes first took the professional stage in 1984 with «Black Elk Speaks» and has never looked back. He moved audiences with unforgettable performances in «Dances with Wolves,» «The Last of the Mohicans,» «Geronimo: An American Legend,» «Heat,» «Avatar,» «Being Flynn» and «Hostiles» and broke new ground with non-traditional roles. On Oct. 27, Wes will receive an Honorary Oscar from the Academy of Motion Picture Arts and Sciences, given to honor extraordinary distinction in lifetime achievement. Follow Wes on Facebook and Twitter.